PRAISE FOR ALIVE AND KICKING

You are here:
PRAISE 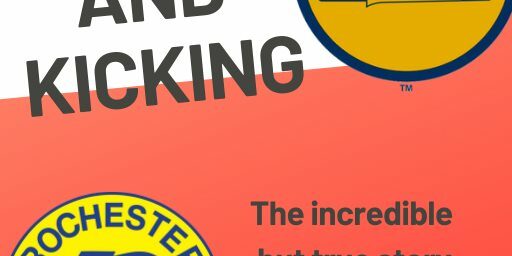 This book details in an engaging manner the history of professional soccer in Rochester from the beginning, the back-room theatrics as well as the on-field drama.

If you are a soccer fan in general or have a connection to Rochester in particular, I urge you to read this book.

It all started in a broom closet, in the Italian American Sport Club in Rochester New York, with meetings of a group of local businessmen enthused by images of the 1966 World Cup finals. They decided to form a professional soccer team. Little did they know that in the years ahead the Rochester Lancers would become champions of the NASL, the top professional league in the country. Michael Lewis writes a compelling history of the early days of the Lancers, the people behind the scenes, the almost unbelievable turnover of coaches and players from around the world, and the David and Goliath battles against the likes of the New York Cosmos in front of the passionate home fans.

This highly researched book is a must read for anyone interested in soccer and the challenges and rivalries that impact the game.

Michael Lewis’ book “Alive and Kicking: The incredible but true story of the Rochester Lancers,” is an in-depth and detailed walk through the history of my hometown team. This book chronicles the challenges, stories and fascinating world behind the scenes of professional soccer, in the early days of the sport in America.

The Rochester Lancers were a key ingredient in the recipe for success of soccer in the United States. A beautifully written book about a storied league.

This is a must read for all soccer fans, especially those who want to learn what the sport was like in the U.S. before MLS; from the ethnic roots of the American Soccer League in the 1960’s, to the growth of the North American Soccer League in the early to mid-1970’s, to the star-studded days of the late 1970’s NASL. Throughout those years, the Rochester Lancers were right in the middle of it all. The team in the league’s smallest market provided so many memorable, one-of-a-kind moments. From playing in the two longest matches in pro soccer history, to being the only NASL team to play in the Concacaf Champions Cup, to having both a doctor and a trainer being red carded, to winning a 1977 playoff series against Toronto in the most improbable manner. Throughout the book, you will learn about the many personalities who made the Lancers a unique soccer club, coaches who were hired, fired and hired again, players from all of the world who came together as a family, and owners that kept the team going for 14 seasons against all odds.

From 1974-1980, Michael Lewis covered the team for the Rochester Democrat and Chronicle, documenting all of the up and downs of Rochester’s only major league sports franchise. From his own historical articles, to recent interviews with the men who lived the dream with the Lancers, and painstaking research of matches when many detailed records were not kept. Lewis has pulled together the complete and remarkable history of the Rochester Lancers on a match-by-match basis, including behind the scenes stories that have never been told about the ASL and NASL days, and profiles of some of the best soccer players in North America, who proudly took the field at Aquinas/Holleder Stadium, representing Rochester, New York against the biggest cities and the most famous world soccer legends.

— Andrew Battisti, co-host of Soccer is a Kick in the Grass radio show